These 1″ little boxes won’t solve your storage problems (unless you just don’t where to put that penny, or marble, or piece of lint) but like many miniature things, they are delightful. Once during a bout of unemployment, I folded zillions of these (which may say something about my non-transferable work skills and resulting joblessness). Watch out, they’re fun. Make one, make many: they proliferate under your fingertips.

bone folder, or a pen with a rounded cap to make creases 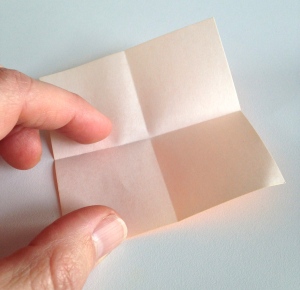 Step 5: Open two of the corners opposite each other. Lift the two sides of the box. Focussing on one corner at at time, press in the “tabs” you created with creases. As you do this, you will be lifting the third side of the box. Then press down the corner over the edge of side. The corner point should meet the other two points. Repeat to make the fourth side of the box. You’ve made the bottom half of the box.

Step 6: To make the lid, you will do the same thing, but with one alteration. In Step 4, instead of folding the edge of the square to the center, you will instead fold it almost but not quite to the center. Leave about a millimeter of distance from the center. Do this again to the top edge. Open, and repeat with the remaining two square edges. This will make the lip of the lid shorter and increase the diameter of the lid, so that the lid fits over the bottom of the box you created. 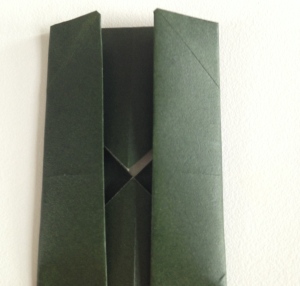 2 thoughts on “DIY: How to Make Mini Paper Boxes”

Dabble. Putter. Create. Homemade city is a space devoted to the love of making. We design and share home and kid-related craft projects that are fast, fun, and cheap.